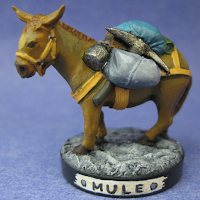 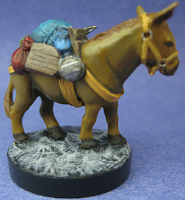 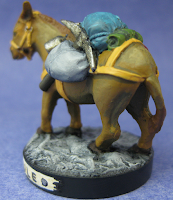 In our ongoing Pathfinder adventure I have a dwarf character and when the party acquired horses, my character bargained for a mule.  Within the Kickstarter Bones models I found a pony/mule and I'd bring him each session painted up just a bit more than before.  I had this model on the side and I kept throwing paint on it whenever I had something interesting left over on the pallet.  The main body is painted with Leather Brown and then shaded and highlighted accordingly.

I'm still working on my "fast/good" technique in trying to quickly put the right shades and highlights in the right spots without careful layering/blending.  What I'm working on is fooling the eye into seeing something great from two to five feet away on the gaming table, that when you pick it up and look closely you see patches.  The pictures are about the same size as the model on the game table and I think when you look at them it looks like a layered paint job.  Selecting a model blows it up to about four times and there you can see that it's is painted in patches without the timely layering/blending.  While it won't win a contest, it looks great on the gaming table.

The model is a Julie Guthrie sculpt and as usual, I believe she nails it with all the right proportions.

Posted by Rick Anderson at 11:26 PM No comments: 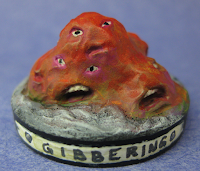 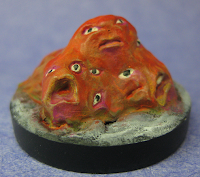 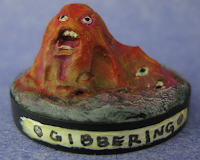 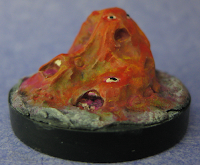 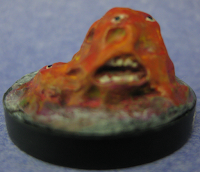 More metal... these Blabbering Horrors (aka Gibbering Mouthers) come two to a package and are great fun.  I put these to the side and would wash these with a multitude of colors.  It started with a light green base coat and on top of this was some yellow, orange, purple, red, etc.  Basically whatever interesting colors I had left on my pallet would get watered down and brushed onto the mound.

Posted by Rick Anderson at 8:54 PM No comments: 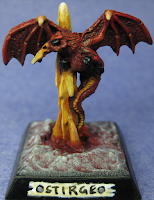 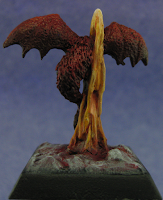 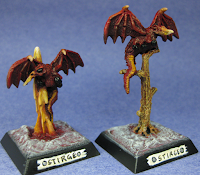 Back to the metal - I needed a couple of stirges and I like these models sculpted by Bob Olley - come two to the package.

The stirges were a pretty simple paint job - I covered the entire model with Scarlett Red.  Mixed a bit of Scarlett Red with black for the shading.  Mixed a bit of Scarlett Red with Bloody Red for the highlights.  Finished off the final highlights with Bloody Red on its own.  The beak/stinger is a blend of Orange Fire, Moon Yellow, and Skull White.  Straight up Black on the eye and claws.  The hooks on the wings were a blend of Filthy Brown to Bone White.  The tail was hit with Parasite Brown and highlighted with Scrofulous Brown.

The stalagmite was done using reds to yellow to white using the same schema as my Stone Lurker.  The anemic stick was Parasite Brown, washed with Devlan Mud, and highlighted with Filthy Brown.

Posted by Rick Anderson at 12:07 AM No comments:

Fifth of five lizardmen profiles from the Bones line.  More information and painting instructions on the Lizardmen posting.

This one was only a single model in one of the kickstarters - it's a different sculptor and therefore a much smaller base which I was able to put on one of Repear's square bases without much effort.  I also used the green shade/highlight on the backside scales.

Posted by Rick Anderson at 3:09 AM No comments: 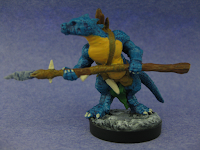 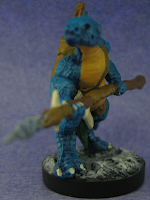 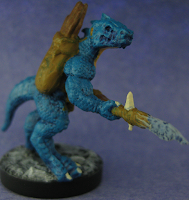 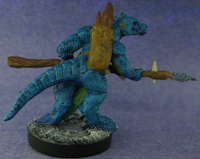 Fourth of five lizardmen profiles from the Bones line.  More information and painting instructions on the Lizardmen posting.

This example has the molded base cut, inserted into a Reaper round plastic base, which is then filled with compound to make it match the integrated molded base.  This is a time consuming process for 27 models and these models in particular have a big semi-circle base which I felt comfortable with leaving as is and would be workable during gameplay.  Therefore, for the sake of time and good enough, I didn't re-base the lizardman models.

Posted by Rick Anderson at 3:00 AM No comments:

Third of five lizardmen profiles from the Bones line.  More information and painting instructions on the Lizardmen posting.

Posted by Rick Anderson at 2:50 AM No comments: 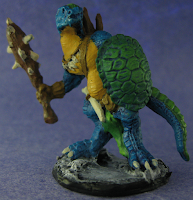 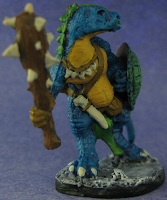 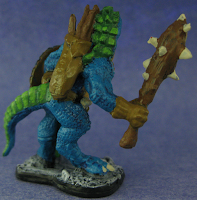 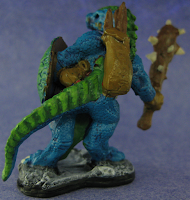 Second of five lizardmen profiles from the Bones line.  More information and painting instructions on the Lizardmen posting.

This model was a bit unique as I added the darker green with light green highlights across the scales starting at the top of the head down to the bottom of the tail.  While I did like the look as it breaks up the blue on the backside, the effort was time consuming for the end result.

Posted by Rick Anderson at 2:43 AM No comments: 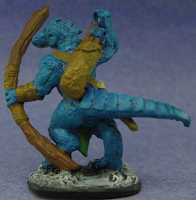 First of five lizardmen profiles from the Bones line.  More information and painting instructions on the Lizardmen posting.

Posted by Rick Anderson at 2:29 AM No comments:

More on these individual models in separate posts - just completed 27 Bones lizardman in five different poses which came out of Bones I, II, and III Kickstarters.  This was an experiment in "fast good" which is looking at batches of Bones and making them look good enough for the tabletop knowing that my players are going to obliterate them within a few rounds of combat.

Posted by Rick Anderson at 3:17 AM No comments: 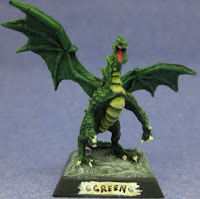 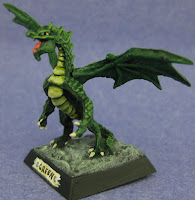 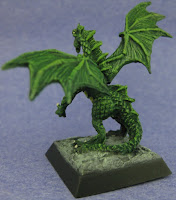 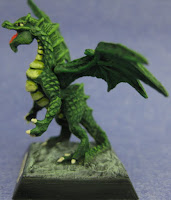 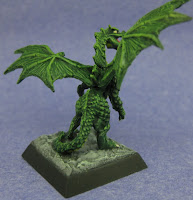 My son needed a medium sized green dragon for his game and did a quick basecoat.  To that I've added a drybrush of Camouflage Green on top of the wings and scales.  Escorpena Green on the belly and then a highlight of Dead Flesh on the belly.  The bottom of the wings highlighted with Sick Green.  Bonewhite on the claws.  Bloody Red on the tongue.  Standard drybrush on the stonework of Cold Grey, Stonewall Grey, and Skull White.

Note that the paint colors are straight up what's on the bottle of Vallejo on this post.  They emulated the GW paint schema way back in the early 2000's and I've been using them for at least the past dozen years.  However, two points.... (a) GW has gone through two different paint schemas since then and relatively few folks know the old color names and (b) I went to my first ReaperCon recently (I'll post more later) and picked up all of their HD paints.  So, in future posts I'll use the Vallejo paint names when I'm using their paints and I'll use the Reaper names when using their paints.

Posted by Rick Anderson at 1:41 AM No comments: 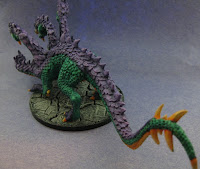 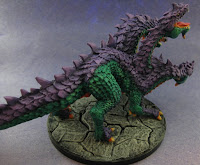 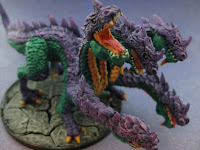 Excuse the quality of the pics - this is a good size "miniature" from Reaper and the camera had major difficulties providing a macro focus on a figure this large.  I've put a single knight up against the Hydra for scale in the last two pictures.  This Hydra has five heads and towers over everything on the board.  I painted this one up over the past weekend as Hurricane Harvey was dumping rain everywhere canceling all outdoor events and forcing me to sit down and paint.  I needed a hydra in my upcoming D&D campaign, so this figure was bumped to the top of the list.

I originally was going to go with more of an alligator/crocodile paint scheme - which would have a more yellowish/creme underbody and a complete green body.  However, the more I thought about it I wanted a fantasy look and therefore I choose the purple on the scales.  For the underbody, I then moved to more of an orange based coloring with neutral tones for highlighting.

This was pretty much a straight up drybrush event starting with Imperial Purple to Tentacle Pink; Scaly Green to Vile Green mixed with Rottting Flesh; and Fiery Orange to Dwarf Flesh mixed with Bleached Bone.

Posted by Rick Anderson at 5:27 AM No comments: