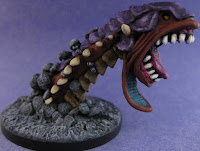 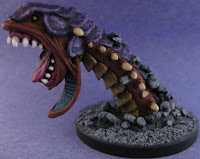 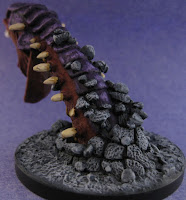 Another magnificent sculpt by Jason Wiebe - this is an awesome metal model - feels great in the hand and was a blast to paint.  I'm so looking forward to dropping this one in a campaign on my adventurers.  An interesting D&D point... other than the gargantuan purple worm, there surprisingly has not been a cave worm or any sort of worm in the large size as an official monster that I could find in any edition.  There's a purple wormling in 5th edition as part of the Storm Kings Thunder, so I'll use that as a foundation.

I picked this model up during the 2017 Reapercon in the open metal bin.  It had a damaged horn on one of the sides, but hey, when you're burrowing through the earth things like that happen :-)

I painted this one over the past few months - I have a number of models which are the "garbage" models - when I'm painting something else and have leftover paint, I apply it to this "garbage" model.

I used Reaper's MSP HD paints - the belly was Mustard Yellow with a number of brown ink washes - the sides were in Maroon Red with a mix with Candlelight Yellow for highlights - the scales on top were painted with Twilight Purple and then highlighted by mixing in Artic Grey - and the flap below the mouth was based in Bright Turquoise and again highlight by mixing in Artic Grey.

Posted by Rick Anderson at 1:44 AM