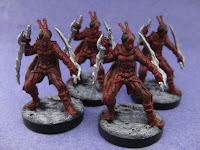 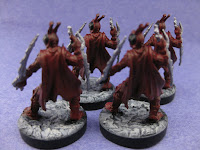 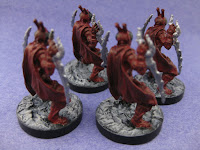 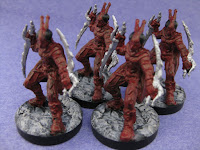 I give a lot of praise to the Bones figures - particularly the monsters - how good they are and particularly their value.  This is a figure where that's not so much.  The metal version is $5.99 retail whereas the Bones version is $3.99 retail.  So $2 savings each.  If you're going to do a one off or even two and you want to put on a great paint job, then go with the metal - the metal version has awesome detail that unfortunately doesn't translate well into the Bones material - maybe it will be better in the new Bones Black.

For these, I just wanted a table ready group of assassins I could throw at my party as a dangerous encounter - for when they get a bit mouthy and boastful around the city.  Therefore I hit these with Gory Red, followed with Black for the eyes and a bit of Chainmail Silver on the sword - called it done.

Another group of bones models out of the kickstarter pile - so up goes the count...