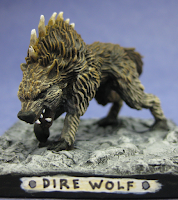 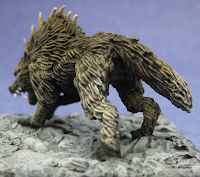 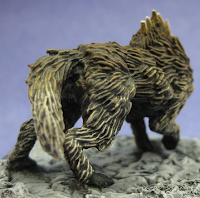 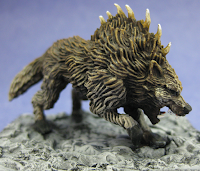 There's game-changing excitement in the miniatures world being provided by WizKids at the moment and that's with their new plastic miniatures line.  Go to www.wizkids.com/unpainted for their complete line.  What's awesome about these?  (a) the quality of the sculpt and model; (b) they're already prepped and primed with Vallejo primer; (c) they're licensed from D&D or Pathfinder so you're getting the monsters right out of the monster manual; (d) the price - they're all priced at $4.99 - you either get two small figures or one large figure for that price - fantastic!

This Direwolf is out of the Deep Cuts Pathfinder line.

I've been buying them up like crazy since they first came out - but I finally broke open the package on one of them and did a quick paint job.  I figured the Direwolf would be quick and easy.  I just got out a bunch of Vallejo browns, bone, white, and black - then went to town on the model.  So much fun - no prep, just paint.  And the model looks great!  I'm very much looking forward to buying and painting more of these models.

The only negative is the base.  The miniature is self-based and then they provide a thin round base to fit the appropriate spacing on the gaming table.  One could just glue the miniature on this base and call it done.  But it doesn't look right to me as the base is too thin and I can't tag the base with my model name.  Here's the fun part.... I received a 3D printer at Christmas... and I've already figured out how to make great square bases at 1", 2", 3", etc. with just the right height and inside depth to hold the miniature.  Add a bit of compound filler around the mini and it's all good!

Not necessarily a negative - but a bummer... nowhere on the package nor on their website does it have the sculptor.  I always like to keep track and give credit to the sculptors that make this hobby what it is today.

Posted by Rick Anderson at 11:45 PM No comments:

It's been almost exactly three years since my last hobby desk update and I want to rave a bit about some a primer I've come across which works extraordinary well on Reaper's bones miniatures.

First the hobby desk.  There's been a significant change - we moved to Austin, Texas during the summer of 2016 and the new house actually has a formal office - so excited, I'm out of the spare room in the basement and actually in a very spacious den.  I went to IKEA and purchased three tables that I use in an L shaped formation - one table for hobby, the corner table for my personal computer, and the third leg I use for my work laptop and spreading out my office work when I need to work from home. 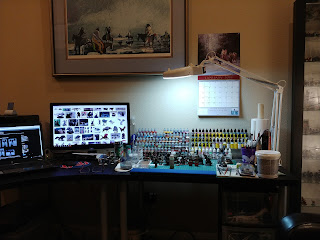 I also re-purposed an IKEA glass enclosed shelving unit that holds all my completed models (it used to be in my oldest son's room long ago).  Works great for models.  I'd like to add more glass shelves but unfortunately, IKEA doesn't produce this unit anymore.  I added a small battery operated led light I picked up from Home Depot and mounted that on the top of the unit which is a nice effect if I'm showing off models. 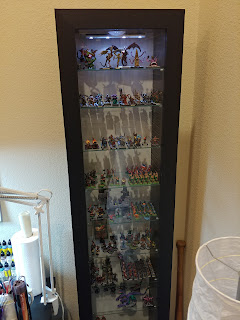 For paints, I came across Dr. Faust Youtube video of how he re-organized his painting desk about six months ago and he utilized acrylic racking designed for nail polish.  Absolutely brilliant.  I did some measurements and while I didn't order the exact same unit, I utilized the same idea and picked up a couple of CQ Acrylics 5 layer rack from Amazon which fit my desk space better.  Word of warning, I ordered two for myself and another one later for my son - all three came cracked or chipped in some way from shipping.  Nothing a bit of glue couldn't fix, but annoying none the less.  They hold Vallejo, Reaper, and Games Workshop paints.  Each row holds 16 bottles of Vallejo or Reaper for a total of 80 bottles of paint.  Not sure on the GW - I only have an old pot of red ink, a wash of devlan mud, and a pot of liquid green stuff (which in my opinion is the best "paint" GW has ever produced).  As they're a bit wider, I'd guess you'd get a total of 60. 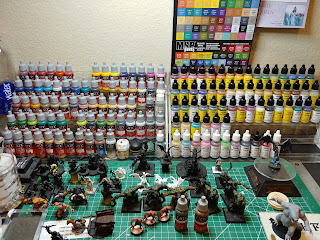 As to those wall shelves I had hanging above my previous desk.... I have enough room in the new space to fit a couple of IKEA's billy bookcases and have all my rpg books, and "to be painted" models.  Those bookcases work out really well.  I went back to IKEA and bought a couple of extra shelves as miniatures don't need the full height of books/magazines. 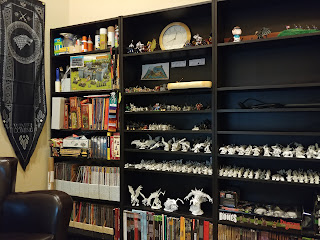 And now to my newest find... primer for Reaper's bones miniatures.  I recently went to the 2017 Reapercon for the first time.  Reapercon is hosted in a suburb of Dallas near the airport and as that's an easy 3 hour drive for me, I was able to finally do something I've been wanting to do for a very long time.  At Reapercon they had an awesome swag bag full of miniatures, paints, and other goodies from Reaper and various vendors at the convention.  One of the goodies in the bag was a bottle of Stynylrez primer sample (in green color) from Badger Air-Brush Co.  As a side note, I was able to see a close-up demo of airbrushing minis and I came so close to going home with the con special package from Badger - maybe next year - so cool.  Back to the primer... I'm guessing that it's their in-house name or they're third partying the primer; either way, the primer is fantastic as a brush-on for the bones miniatures.

I know, I know... supposedly you don't need to primer bones.  I'll disagree with that statement.  Bones miniatures need a solid coat of something else the first layer will be blotchy and later layers will scratch off paint to the bone.  When bones first came out (and this is before anything official was published by Reaper) I tried to use the standard spray paint primer - it eats into the pvc and creates a tacky surface that never dries - those first kobolds are still tacky several years later.  Since then, I've been pretty successful using Vallejo's black with a large brush and just the right amount of water - not enough and it's too thick - too much and it doesn't stick to the miniature.  With the Stynylrez well shaken I can dip my large brush directly into the bottle and paint straight onto the bones miniature.  It sticks well to the mini and provides a great surface for both the Vallejo and the Reaper paints.

I did a quick Google search and Amazon has a large bottle of grey, white, and black colored Stynylrez primers.  Other hobby sites have smaller bottles and various color selections.  I will definitely be purchasing more in the future once this bottle is empty and hopefully that future includes an air-brush. 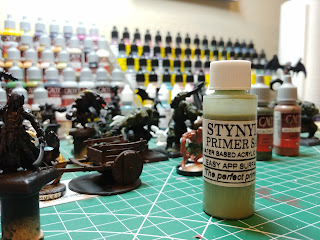 Posted by Rick Anderson at 2:32 AM No comments: 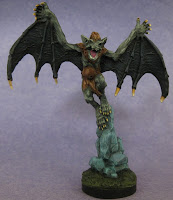 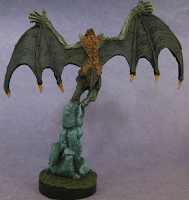 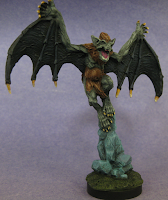 This is the Werebat from the Reaper Miniatures Bones3 Kickstarter - given number 169 as part of the Kickstarter, the model has not yet been released in either bones or metal at this time.  Once released, I'll come back and give it a proper number and appropriate sculptor tag.

First time using Reaper Miniatures MSP paints (MSP = Master Series Paint).  I picked up their three cases of MSP HD which provides the entire HD range.  A couple observations after using their paint in comparison to the Vallejo Game Colors...(a) you can use the paint straight out of the bottle without any water - it contains extender and flow which makes it flow silky smooth off the brush and takes a bit longer to dry; (b) it dries dead flat and sucks light out of the air - ok, maybe an exaggeration, but there's no glare at all; (c) it takes a couple coats - it's more translucent / less opaque than the Vallejo - this can be beneficial if you're layering or blending but does make double the work when putting down a base coat; (d) there's no system with the HD range, you have to tinker on your own making shades and highlights of your base color.

Here are my thoughts on Reaper's MSP paints... if you're a beginner, stick to GW or Vallejo's - it's easier to paint using a system approach with more opaqueness to the paint.  However, as soon as you break into that intermediate level and above, then switch over to Reaper.  You have greater control of the way the paint comes off the brush and onto the model - it's silky smooth, dries to a crisp flat, and I found that I didn't need to dilute - I was able to paint straight from the bottle - in fact, I used a Kolinsky sable brush size 8 to paint the entire model.  I've never been able to do that with any other paint before.

Again, working on fast good painting - I tried keeping the paints to a minimum and techniques simple so I could bang this model out within a few hours.

Step 1: Undercoat model with Stynylrez green primer (this is awesome on bones)
Step 2: Use Ash Grey on the skin
Step 3: Use Ruddy Brown on the fur
Step 4: Use Solid Black on the wings
Step 5: Use Winter Blue on the rock formation
Step 6: Use Jungle Camo on the ground
Step 7: Use 1/3rd Solid Black with each of the basecoat colors with a bit of water to make a wash and apply to each section
Step 8: Use the base color to provide an initial highlight
Step 9: Use 1/3rd Solid White with each basecoat color to provide highlights except use Tropical Aqua as highlight color on the rock formation and drybrush Nightsky Blue on the wings
Step 10: Use Desert Tan on talons and claws
Step 11: Use Solid White to highlight talons and claws
Step 12: Use Witchcraft Purple on the tongue

Posted by Rick Anderson at 10:31 PM No comments: