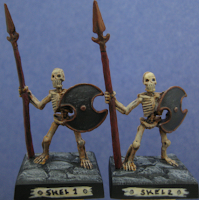 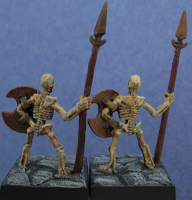 Nothing overly exciting about these skeletons other than they're officially numbered as the first of the Reaper Bones miniature line (fitting - skeletons - bones) at 77001.  They're also the first miniatures I've painted from the Kickstarter - so two down and hundreds more to go!  The Kickstarter included two while a package of 77001 will include three.  I didn't invest a lot of time on these - quick sets of drybrushes, a wash, and set into one inch bases from Fortress Figures.

Again, I can't say enough about the value of these new Bones - a three pack will cost the gamer $4.99 - whereas the pre-painted Legendary Encounters will go for $8.49 - and if you want them in the Legends metal line it will set you back $10.35.

Being a bit critical here - the long shafts of the spear on these Bones lines just won't get and stay straight.  Even after using the boil and ice method I still can't get the spears to be the way I want them - which is quite possible with metal.  However, these guys are going to be cannon fodder to all but the lowliest first level adventurers - they're designed to be placed on the mat and swept off.
Posted by Rick Anderson at 11:43 PM No comments: 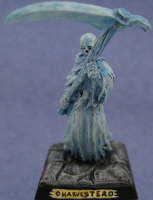 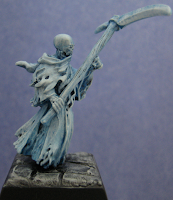 I absolutely love some of Game Workshop's older skeletons and wraiths that were sculpted pre-2000.  The old Vampire Counts models were a mixed bag in my opinion.  There were some models like the wights, necromancers, and banshees that just looked ridiculous - kinda like skeletons going to a Mardi-Gras.  There were other sculpts during the same time period that were just fantastic and I've wanted to pull into a Dungeons & Dragons game.

I have the Citadel Miniatures 2000 Annual that had all the GW miniatures in production at the time.  The Armoured Skeletons on the bottom of pages 336 are awesome and I've painted up skeleton 3 and skeleton 5.  Would love to get my hands on a few more such as sculpts 1, 2, and 4 and make a proper five piece unit out of them that I can drop on adventurers - they all have a bit of heavy armour (british spelling) and a bad-ass halberd to give out some damage.

In that same book a few pages later - page 343 to be exact - is a set of wraiths with a killer scythe.  My favorite of these has been wraith 3 and I picked him up as GW blister pack 8572G for $5.49 over a decade ago and he's been sitting on my shelf (last time I saw this figure at the GW store it was in the high teens - crazy prices for a single figure).  I love the flowing robes and the way the sculpt floats above the base - I've kinda had this Scooby-Doo vision in my mind of a ghostly wraith floating down the castle halls chasing intrepid adventurers to their doom.

Therefore, unlike similar Reaper models (skeleton/ghost with sword, skeleton ghost) I painted this up as vision of a blue ghost including the robes, head, and weapon.  I started with enchanted blue as the base color and kept adding skull white with each layer until I was satisfied that I had captured the right look.  I also tossed out the tiny base and put him on a GW one inch base with my standard dungeon look and the name "Harvester".

The Citadel book says the miniatures on page 343 were designed by Michael Perry and Trish Morrison - doesn't specify who did wraith 3.

Posted by Rick Anderson at 9:59 PM No comments: