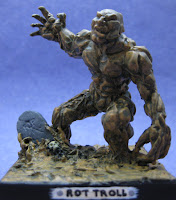 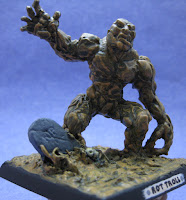 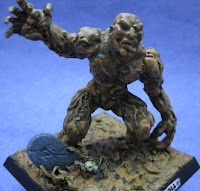 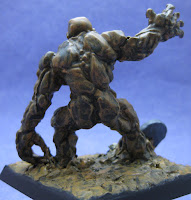 I've noted before that I don't always agree with the end result of Reaper's goal for a particular model - and while Sandra Garrity really knocked it out of the park with this sculpt, it looks more troll-like than it does elemental.  In the 5th edition of D&D a new troll is published in Mordenkainen's Tome of Foes called the Rot Troll.  I think this model fits brilliantly in that new roll - particularly that it gives necrotic damage on its attacks and therefore the graveyard look is perfect - so I designated it my version of a Rot Troll and I can't wait to drop this nasty beast on my party of do-gooders!

My last model I noted nothing could be easier than a few layers of metallic drybrushing - hmmm.... this might have actually been easier.  I used a wash technique which is something I do very little of but I kept using layer after layer until I achieved the effect desired.

This is the metal version for which I don't see a bones version of at this time.  As such, it's a nice heavy model and has quite the thud when you put this one on the game mat.