Minions - Miniatures of Another Sort

While not exactly miniature painting, they are miniatures of another sort...  we'll call it miniature baking! 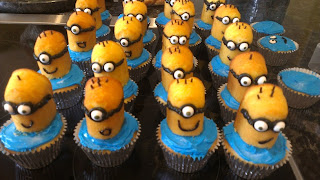 My daughter baked Despicable Me Minions for my youngest son's birthday - he turned 7.  I thought they were awesome enough to throw up here on my miniature painting page to share with everyone.  And yes, those were real twinkies!  Most likely one of the first batches after the great twinkie shutdown.

Posted by Rick Anderson at 12:38 AM No comments:

Email ThisBlogThis!Share to TwitterShare to FacebookShare to Pinterest
Labels: Cupcakes, Despicable Me, Twinkies

Now that I've received all of those new shiny bones I needed a method of "fixing" or tweaking them to a desired position.  In the packaging of all miniature models there are always the occasional bent swords, figures, staff, etc. as the miniature gets smooshed into the packaging (one website I read remarks that his miniatures need some viagra).  With metal figures it's a simple pinch with the hobby pliers and it's easy to repose or straighten out a bent item.

Pulling, twisting or some other manipulation doesn't do a dang thing to the plastic models as the plastic has "memory" and contorts back to it's undesired state.  Off to Google I went and I found lots and lots of advice and information.  I found a good site that provided accurate information as well as a youtube video.  The white plastic is some sort of pvc mixture that when heated goes back to its original memory state (ie - a straight sword).  To get it to stay in that original memory state or to manipulate into a different pose the trick is to rapidly cool it down.

I was extremely successful following these steps:

===
7/28/2013 update: if you have a one off Bone and you don't want to go through the entire process of boiling a pot of water and dipping into ice water - then the use of the bathroom sink with the temp turned to maximum hot water and a nearby cup of cold tap water will do the trick.  It takes a little longer - you definitely need to work at it a bit more (the plastic doesn't get to the goo state) - and dunking into cold tap water isn't as instant hard as ice water, but it does the trick.
===

Its a bit different than dealing with metal miniatures but no less taxing - in some ways it's easier.  I was able to straighten out the base of the miniature, the angle of the miniature, swords, staffs, wings, etc. as well as repose as desired.

My recommended websites that I found most useful:

Hope that helps everyone else out there!
Posted by Rick Anderson at 4:21 PM No comments:

My Reaper Bones are Here

Wow!  Can't believe it's been since September 2012 that I last posted - time flies when you're having fun and coaching an 18u fastpitch softball team.

I haven't been not painting - I've actually painted a couple of models in 2013 - one was a Reaper Bones model and the other an old Games Workshop model.  They're sitting on my desk waiting for picture taking.  I've also been re-basing/tweaking some really old models that I wanted to update and I'm just about done with those.  Additionally I've been basing lots and lots of models - one of my goals this year was to take small limited opportunities to unpackage and base my entire line of Reaper Dark Heaven Legends - which for the most part I've done.

The big news is.... I received my Reaper Bones!  I ordered the Vampire level Kickstarter campaign as well as all the additional options.  Hundreds and hundreds of miniatures came in a 14.5 pound box about 10 months after the Kickstarter.  The wait was well worth it and here is what I received (there is an old Larry Leadhead cartoon about living as long as you have miniatures to paint - I've definitely broken the century mark with this purchase)...

Here is what they look like after opening and laying out on the table - there are four significant pieces I didn't lay out because they are huge - three dragons and Cthulu "miniatures" - they're absolutely huge. 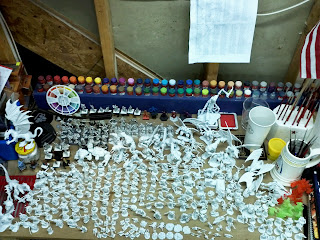 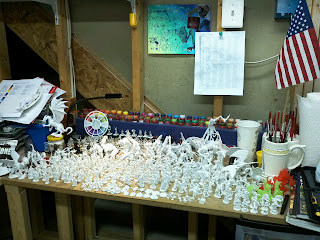 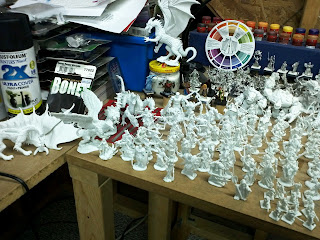 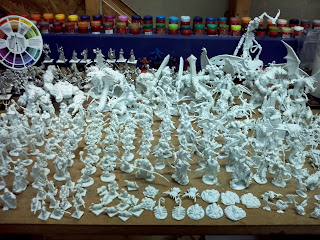 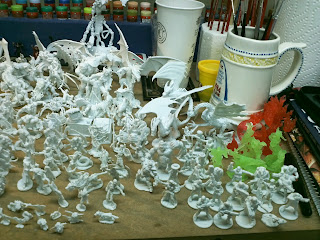 So there it is in all of it's glory - now to start painting during what remains of 2013!