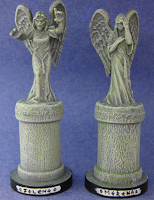 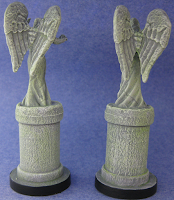 These were a quick paint job as I need a couple of statues for my upcoming D&D session.  I picked these two up in a single package from my local gaming store Wonkos.

Just to give them a bit of character, I mounted these onto a couple of wooden spools.  Then a quick paint job of Codex Grey followed by a drybrush of Shadow Grey followed by a final drybrush of Skull White.  Next a bit of Scorpion Green was watered down and drizzled on here and there for some aging (although that didn't come out in the pictures very well - but it's definitely noticeable on the table).

While these were the Bones figures, they weren't part of the kickstarter pile.

In honor of opening night of Underworld Blood Wars, the vampire looking statue is named Selene.  And yes, the latest release of Underworld kicked some ass!  It definitely brought the franchise back as Awakening was a bit of a let down.

Posted by Rick Anderson at 3:11 AM