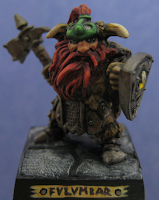 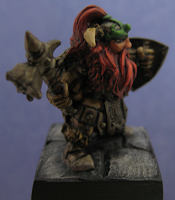 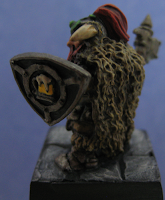 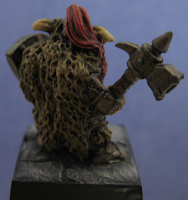 Another Reaper Bones model - sculpting was done by Werner Klocke  - and he's a pretty good size for a dwarf - definitely fills the role as the big time warrior or even the king.  This is a model was pre-Kickstarter and I purchased new in package at my local gaming store for $1.99.  It's the same model as the Legendary Encounters pre-painted figure 20034 sold for $4.99 and matches up with the Warlord model 14146 for $6.49 in metal.

This figure does very well in its Bones incarnation - the detail works quite well all the way around - about the only area of issue was the little bit of mail on the front.  I based him on a plastic base from Fortress Figures - see my other post on square 1" plastic bases from Fortress Figures - they're really going to be useful when I get through my Kickstarter models.

The miniature was painted from a black undercoat.  Unfortunately I didn't really keep track of the painting process on this one as it's a Bones model and now that there's a few hundred minis sitting on my desk... I've been trying to paint to a really good tabletop standard, but at the same time be quick (quick for me anyways).  I used the layering techniques - so the red beard was done red gore, blood red, blazing orange - the coat was scorched brown, bestial brown, vermin brown, and then bleached bone.

Posted by Rick Anderson at 8:12 PM